This year, I attended the annual Bay Area Maker Faire, one of the largest and most extravagant festivals where, "invention, creativity and resourcefulness" can be found in one place. To see all my pictures, check out Novedge on Facebook.

On assignment, I met and rode on my bike with a small group of dedicated enthusiasts at Dolores Park.

Upon my arrival, I couldn't help but notice a fellow cyclist's awesome ride. It turns out the very frame of his MTB bike was crafted out of solid mahogany with absolutely no CNC/CAM! Bay Area native and proprietor of Masterworks Wood and Design, William Holloway has been crafting these human powered locomotives for a number of years now. And if it is any testament to his skills as a craftsman, he reached the Maker Faire before yours truly! 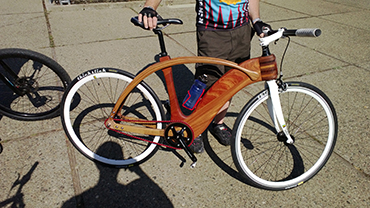 My ride locked and secured, Kinetic Steam Works' printing press beckoned me with its distinct whistle. Compliments to KSW for reminding us that human ingenuity has been ours from the very start and for the freshly printed Maker Faire coasters!

Close by, Fun Bike Unicorn Club (FBUC) had multiple things going on. People could climb into the Whiskeydrome and see if they could ride the wall, or visit their massive tent to check out their showcase of wheeled contraptions. No one bike was the same. The only consistent theme? Pedals, chain and wheels.

The brave and curious, or those wanting to evaluate the sturdiness of their builds, were more than welcome to pedal to the metal with FBUC's Death Defying Figure 8 Pedal Car Race and Power Racing Series. Power Wheels on steroids anyone?

In addition to the various Thunderdome inspired projects and workshops put on by non profit DIY spaces, Nimby and The Crucible, before CAD and 3D Printing, creativity is still a hands-on endeavor.

Having had my fill outside, what was THE hot topic at this year's Maker Faire? – 3D Printing. In fact, if the pictures are any proof of how crowded the place was, I had to wait in line just to say Hi to our friend and VP of Marketing, Afinia's own Aaron Pratt. The Afinia team worked overtime to answer any and all questions, as were representatives from Shapeways and i.materialise. With a host of printed samples for festival attendees to grab, what would happen to the waste generated? Interestingly enough, the OmNom Project aims to make filament replacement as easy as feeding a monster. OmNom might indeed be necessary, as the 3DMonstr team looks to create an industrial grade printer worthy of Tim The Tool Man's praise. Both OmNom Project and 3DMonstr will have Kickstarter campaigns up soon, follow us on Twitter for updates.

In an exploration of architecture's potential future with 3D printing, The California College of the Artsalong with UC Berkeley's Department of Architecture demonstrated new methods and forms for 3D printed architecture on a massive scale. With so much buzz, I had to pinch my shoulder as there was still plenty to see. Moving on! 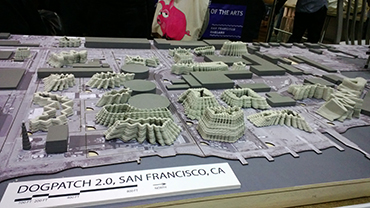 Amongst other projects showcased, Maker Faire had on display a number of kinetic art pieces and participants were encouraged to interact with them. Benjamin Cowden's creation Eating my Cake and Having it Too (2007) gently rotates its handle to lick a lollipop with a prosthetic tongue.

Gather around to reanimate a floating creature with Oakland based artist Anja Ulfeldt's Undercurrent. With the exception of some of the more fragile pieces, most of everything I saw was hands on. A number of masks from pop culture icons were on display as well. For a fanboy like myself, no way would I miss out on the chance to dress up! 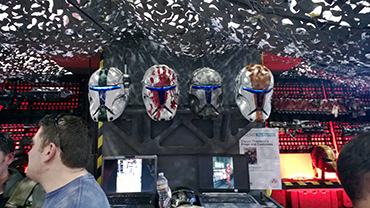 Do you want to see all my photos? Check them out on Facebook!

Learn how to create stunning 3D artwork by gaining knowledge with the most powerful rendering engine out there.
Read More

CYPE occupies a leading position within the AEC sector, offering a variety of programs that stand out. CYPE is hitting the US market and we couldn't be more excited.
Read More

CAD Exchanger helps Engineers (including Product Designers and Software Developers) understanding each other in a multi-CAD world.
Read More